Why Newton was wrong

Theory says that the past performance of share prices is no guide to the future. Practice says otherwise 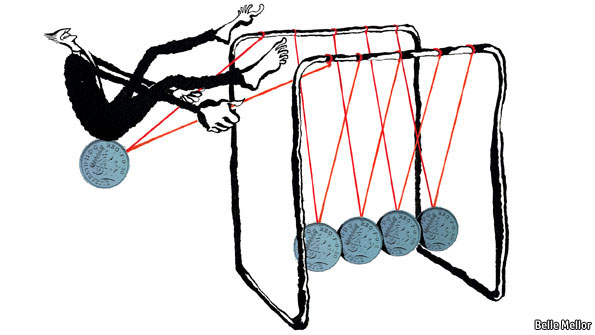 WHAT goes up must come down. It is natural to assume that the law of gravity should also apply in financial markets. After all, isn’t the oldest piece of investment advice to buy low and sell high? But in 2010 European investors would have prospered by following a different rule. Anyone who bought the best-performing stocks of the previous year would have enjoyed returns more than 12 percentage points higher than someone who bought 2009’s worst performers.

This was not unusual. Since the 1980s academic studies have repeatedly shown that, on average, shares that have performed well in the recent past continue to do so for some time. Longer-term studies have confirmed that this “momentum” effect has been observable for much of the past century. Nor is the phenomenon confined to the stockmarket. Commodity prices and currencies are remarkably persistent, rising or falling for long periods.

The momentum effect drives a juggernaut through one of the tenets of finance theory, the efficient-market hypothesis. In its strongest form this states that past price movements should give no useful information about the future. Investors should have no logical reason to have preferred the winners of 2009 to the losers; both should be fairly priced already.

Markets do throw up occasional anomalies—for instance, the outperformance of shares in January or their poor performance in the summer months—that may be too small or unreliable to exploit. But the momentum effect is huge. Elroy Dimson, Paul Marsh and Mike Staunton of the London Business School (LBS) looked at the largest 100 stocks in the British market since 1900. They calculated the return from buying the 20 best performers over the past 12 months and then holding them, rebalancing the portfolio every month.

This produced an annual average of 10.3 percentage points more than a strategy of buying the previous 12 months’ worst performers. An investment of £1 in 1900 would have grown into £2.3m by the end of 2009; the same sum invested in the losers would have turned into just £49 (see chart 1).

Messrs Dimson, Marsh and Staunton applied a similar approach to 19 markets across the world and found a significant momentum effect in 18 of them, dating back to 1926 in America and 1975 in larger European markets. A study by AQR Capital Management, a hedge fund, found that the American stocks with the best momentum outperformed those with the worst by more than ten percentage points a year between 1927 and 2010 (see chart 2). AQR has set up a series of funds that attempt to exploit the momentum anomaly.

Too costly, too risky?

Even the high priests of efficient-market theory have acknowledged the momentum effect. Well-paid fund managers have spent decades trying to find ways to beat the market. But you have to wonder why they bother devoting so much money and effort to researching the fortunes of individual companies when the momentum approach appears to be easy to exploit and has been around for a long time.

Logic suggests that the effect should be arbitraged away. If the best performers of the past 12 months continue to do well, smart investors will buy them after 11 months have elapsed, reducing the returns on offer to those who wait the extra month. In turn, others will buy after ten months, then nine, eight and so on until the effect disappears.

When efficient-market theorists come across a market anomaly, they tend to dismiss it in one of three ways. The first argument is that the anomaly is a statistical quirk obtained by torturing the data; it will not persist. But the momentum effect was noticed in 1985 (by Werner de Bondt, a Belgian economist now at DePaul University in Chicago, and Richard Thaler, of the University of Chicago Booth School of Business) and has not gone away.

The second is that any gains from the strategy will be dissipated in higher trading costs. Clearly, the LBS team’s strategy of rebalancing a portfolio every month would be expensive but Mr Marsh says these would not offset an annual performance gap of over ten percentage points.

The third is that higher returns simply reflect the higher risks of the strategy. This has been used to explain away two other notable anomalies: the size and value effects. Small companies tend to do better than bigger ones in the long term, but they tend to be less diversified and therefore more risky. And shares that look cheap on conventional measures (asset value, dividend yield, price-earnings ratio) also tend to deliver above-average returns, but belong to firms that are likelier to go bust.

According to a paper by Cliff Asness, who co-founded AQR, the better performance of momentum stocks is not merely a reflection of higher risk. He finds that the momentum effect persisted even when the data were controlled for company size and value (defined as price-to-book) criteria. Another explanation is needed.

One possibility relates to timing. The efficient-market hypothesis assumes that new developments are instantly assimilated into asset prices. However, investors may be slow to adjust their opinions to fresh information. If they view a company unfavourably, they may dismiss an improvement in quarterly profits as a blip, rather than a change in trend. So momentum may simply represent the lag between beliefs and the new reality.

Once a trend is established, a share may benefit from a bandwagon effect. Professional fund managers have to prepare regular reports for clients on the progress of their portfolios. They will naturally want to demonstrate their skills by owning shares that have been rising in price and selling those that have been falling. This “window-dressing” may add to momentum. Paul Woolley of the London School of Economics has suggested that momentum might result from an agency problem. Investors reward fund managers who have recently beaten the market; such fund managers will inevitably own the most popular shares. As they get more money from clients, such managers will put more money into their favoured stocks, giving momentum an extra boost.

It is hardly a surprise that the momentum effect has been exploited by some professionals for decades. Commodity trading advisers (CTAs), also known as managed futures funds, exist to exploit the phenomenon. They take advantage of trends across a wide range of asset classes, including equities and currencies as well as raw materials. Martin Lueck was one of the three founders of AHL, one of the more successful CTAs, and now works for another trend-follower, Aspect Capital. “Trends occur because there is a disequilibrium between supply and demand,” he says. “The asset is trying to get from equilibrium price A to equilibrium price B.”

Many of the trend-following models were developed in the late 1970s and early 1980s. They were exploited by investors such as John Henry, best known outside the financial world for owning a baseball team, the Boston Red Sox, and a football club, Liverpool (which is on a downward trend of its own). One of the simplest was to buy an asset when the 20-day moving average of its price rose above its 200-day average. In a recent study Joëlle Miffre and Georgios Rallis of the Cass Business School in London found 13 profitable momentum strategies in commodity markets with an average annual return of 9.4% between 1979 and 2004.

Modern CTAs like Aspect and Winton (run by David Harding, another founder of AHL) devote a lot of effort to researching new ways of exploiting momentum. That has sometimes meant trading faster and faster, with a time horizon of milliseconds rather than months. However, not all market movements are part of a trend. Some are merely random fluctuations. “As you trade faster, it is easier to get misled by the noise,” says Mr Lueck. Trend-followers can get “whipsawed” in volatile markets, buying at the top of a short-term trend and then selling at a loss shortly afterwards.

That may be one reason why the momentum effect has not been arbitraged away: it can go horribly wrong. Just as trees do not grow to the sky, share prices do not rise for ever. The effect tends to work for the best performers over the past 12 months, but not for those that have shone for longer periods, say three or five years.

The value of value

That may be because of another anomaly, the value effect. Investors eventually get too pessimistic about struggling firms, and price their shares too cheaply. That turns them into bargains. Broadly, whereas momentum works over the short term, value is successful over longer periods. The result can be sharp reversals in markets—and nasty surprises for momentum traders. One such turning-point occurred in 2009. Investors who used a short-term momentum strategy, buying the winners of the previous six months, would have lost 46% in the British market and 53% in America, according to the LBS team. Similarly bad years were 1975, 2000 and 2003.

The momentum effect allows investors to get rich slowly. But many fund managers are impatient and thus use leverage (borrowed money) to enhance returns. Such an approach would lose so much money in bad years that clients might lose faith. “To exploit momentum, you need investors who understand the portfolio is going to be subject to a very high level of volatility,” says Mr Marsh of the LBS.

Momentum is so significant in stockmarkets that academics are starting to analyse what role it plays in professional fund managers’ returns. This is all part of the long process of removing the “magic” from financial performance. In the early days of fund management, in the 19th century, there were no stockmarket indices. Fund managers could thus claim that a positive return was down to their own brilliance, rather than a general rise of the market, and clients could not tell the difference.

After the development of benchmarks like the S&P 500, clients began to demand that fund managers proved their skill by outperforming an index. Many failed; but even some who succeeded may have done so by holding concentrated portfolios of only a few stocks. Such portfolios were more risky than the overall market. So the next step was to measure the managers’ performance after adjusting for risk. Even those managers may have done well because their investment style (value, for instance) was in fashion. So academics started to allow for that, too.

In effect, the portion of the investment return that was purely a result of fund managers’ skill was being reduced at every stage. Now, says Mr Marsh, academics are looking to see whether some outperformance is really all down to momentum.

All this analysis matters because these factors can be replicated. These days investors can not only match a benchmark through simple index-tracking funds; they can also own portfolios that exploit the value and momentum effects without paying hefty fund-management fees. The investment-management industry may become even more commoditised.

The momentum effect raises a further important issue. If markets are rational, as the efficient-market hypothesis assumed, then they will allocate capital to its most productive uses. But the momentum effect suggests that an irrationality might be at work; investors could be buying shares (and commodities) just because they have risen in price.

That would help explain why bubbles are created and why professional investors ended up allocating capital to dotcom companies with no earnings and business plans written on the back of a cigarette packet. Momentum can carry whole economies off track.